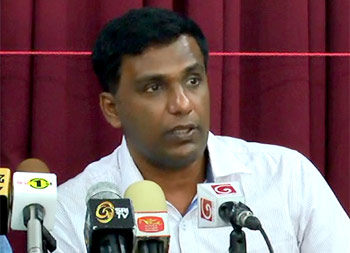 He said the UNP was adopting this strategy either because it was scared of facing the elections or was not confident enough to do so.

Mr. Tennakoon said the LG elections had been delayed by more than one and half years for the first time in Sri Lanka.

“Elections have been held even during the armed conflict and other disturbances. But this time the elections are being delayed in a tactful manner,” he told a news conference and added that by delaying the elections the government was blatantly violating good governance principles and the people's mandate.

Referring to the government’s plan to lease lands in Hambantota to a Chinese Company, Dr. Nirmal Ranjith Dewasiri said Prime Minister Ranil Wickremesinghe claimed he would inform the people about the agreement and highlighted the fact that the people had a right to know it before it was finalised.

He said one of the main criticisms against the previous government was its lack of transparency and its as the Hambantota Port, the Mattala Airport and Sooriya Wewa stadium were not economically viable. (Ajith Siriwardana)