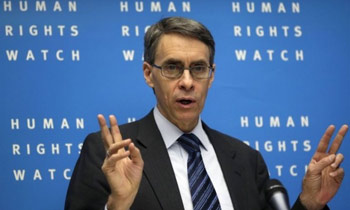 Though the Sri Lankan Government was able to report progress on certain aspects and sought technical expertise from the UN and other countries, the UN Human Rights Council resolution adopted in October 2015 on the country remained largely unimplemented, the Human Rights Watch (HRW) on Thursday said.

The international nongovernmental human rights organization included these remarks in its 27th World Report, a review of human rights around the globe, which was launched by the organisation’s Executive Director Kenneth Roth in Washington DC, US on Thursday.

From the report, the HRW said Sri Lanka pledged to undertake many human rights reforms, including resolving the many transitional justice demands arising out of the civil war.

“From the UN resolution, Sri Lanka promised to establish four transitional justice mechanisms, including a special court integrating international judges, prosecutors, lawyers and investigators with an independent investigative and prosecuting body. The resolution also called for an office on missing and disappeared persons, a truth-telling mechanism, and a mechanism designed to guarantee non-recurrence and reparations,” it said.

The UN Commissioner for Human Rights, Zeid Ra’ad al-Hussein, who visited the country, called for speedier implementation of the resolution, for greater efforts at confidence-building with the minority populations and the need for international participation in transitional justice mechanisms.

The report said the senior government members continued to issue contradictory statements on the need to have international participation in the four transitional justice mechanisms, with the President and Prime Minister both claiming these would be wholly domestic processes, contrary to the Human Rights Council resolution.

However, the report said the new Sri Lankan government continued to engage with the international community unlike the previous ‘hostile’ government, with key actors such as the US and European Union voicing cautious optimism regarding the government’s efforts to implement the 2015 Human Rights Council resolution.

Meanwhile, it said the Sri Lankan Government had not only failed to abolish the draconian Prevention of Terrorism Act (PTA), it’s unwillingness to consult adequately before enacting legislation to establish the Office of Missing Persons (OMP) has damaged public trust during the transitional justice process.

Referring to alleged incidents of torture in police custody, the watchdog said Sri Lankan police are not held accountable for routine torture and ill-treatment of individuals taken into custody.

“Sometimes torture is carried out to extract confessions, but it is also used for personal vendettas or to extort funds. Police often used methods designed to leave no visible marks, suggesting a level of institutionalization,” it said adding Sri Lanka appeared before the UN’s Commission Against Torture in November and denied allegations of torture and abuse.

The report highlighted that more than 1 million Sri Lankans are employed overseas, mostly in the Middle East, and many remained at risk of abuse at every stage of the migration cycle.

“Sections 365 and 365A of the Sri Lankan Penal Code prohibit “carnal knowledge against the order of nature” and “gross indecency,” commonly understood in Sri Lanka to criminalize all same-sex relations between consenting adults,” the report said.

Allegations of sexual and other violence committed against women during the civil war are expected to be addressed through the transitional justice mechanisms, although there are concerns that many women will be reluctant to come forward due to the lack of an independent victim and witness protection program, the HRW said.

“Although the government, elected in January 2015, did not deliver all reformist promises made during the election campaign, media and civil society organizations (CSO) in the country largely enjoyed continued freedom from surveillance, harassment, and attacks. A long-promised Right to Information bill was enacted in June 2016. There was some progress on emblematic cases linked to the civil war, such as the murder of a prominent newspaper editor, the enforced disappearance of a political cartoonist, and the killing of five youths by state security forces in the eastern district of Trincomalee,” the report said commenting on Sri Lanka. (Lahiru Pothmulla)