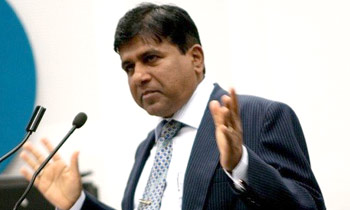 He told Parliament that the system was retarded because while some schools have all the facilities several others are without. “When a school is developed by a Provincial Council it is brought under the Central Government,” the minister said.

He said the SAITM Medical College in Malabe was critical of doctors as a whole and the GMOA. “I went to see a specialist recently and was shocked to see how he was treating patients,” the minister said, while highlighting the fact that the doctor was treating nine patients at a time.

“I am not saying lawyers are perfect as we have managed to suspend some of them from practicing the profession,” he said speaking about his own profession.

The minister criticised the Government Medical Officers' Association (GMOA) saying they are protesting against SAITM taking advantage of the freedom given by the present regime. “GMOA was silent like kittens during the tenure of former president Mahinda Rajapaksa,” he said adding that it was surprising to see Mr. Rajapaksa saying he was against SAITM.

“SAITM was set up during his tenure as president and I don’t know whether to cry or laugh at these hilarious jokes,” he said.

Joint opposition MP Wimal Weerawansa warned that the SAITM might baloon into dangerous proportions if it was not resolved now. He said it might end up with a killing like the case of Thrimawithane who was killed during the conflict over the Ragama Private Medical College.

Health Minister Rajitha Senaratne said certain GMOA members and leading medical practitioners have become examiners of SAITM though many of the doctors were opposing it. (Yohan Perera)