You are here: Home / Breaking News / Size and skills of workforce key to economic advancement 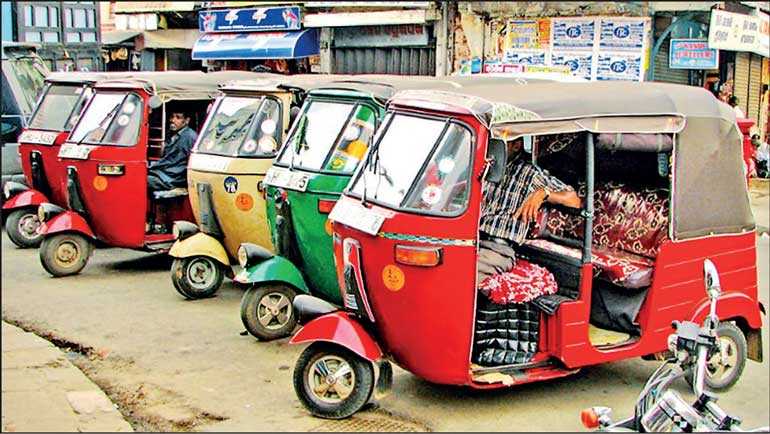 A total of 1.059 million three-wheelers are registered with the RMV. Just over one million people are estimated to be three-wheeler drivers. This is close to 15% of the working population

A big chunk of America’s economic advance in the 20th century and China’s in the 21st century were driven by improvements in human capital, the size and the skills of the workforce. The survey of

Sri Lanka today is one of the largest labour exporting countries in South Asia and to add to that we have a large group of young people who prefer to be self-employed driving three-wheelers instead of working in industries. There has been a mismatch in our labour market for quite a while in Sri Lanka as a result. Also, a limited number of people enter into tertiary education (especially to universities).

The Transport and Civil Aviation Ministry some time back issued a gazette which permitted only those above 35 years of age to apply for driving license for three-wheelers. However the Cabinet of Ministers revoked the Gazette notification barring those below 35 years from obtaining three-wheeler driving licenses.

Statistics show there are roughly 1.059 million three-wheelers registered with the RMV. A three-wheeler requires at least one driver. Out of the 7.8 million employed population, 1.2 million people are estimated to be three-wheeler drivers. This is a staggering 15.4% of the working population. However research suggests less than 500,000 drivers actually engage in this full time and the average income ranges from Rs. 20,000 to Rs. 40,000 per month. Many people also work as part-timers to supplement their income.

Roughly five million citizens between the ages of 15 and 25 will determine the country’s future in the next 10 years. If these young people get marginalised, sustainable economic growth will be virtually impossible. Today despite all the efforts by successive governments many graduates and educated youth in the rural areas still remain unemployed, as a result they get jobs below their qualifications outside the province.

In most instances the only available employment falls in the category of day-labour. Most of the youth want something better than that. Due to this most young people get attracted to own or hire a three-wheeler to make a living. As a result many of the sectors of the economy are starved of manpower.

We need to find a way to move them into better paying, low-stressed productive jobs, in order to fill the acute manpower gaps in certain industries and also strengthen the talent pipeline in the manufacturing, construction, tourism and services sectors.

a) The three wheel drivers virtually have no future and their expectations of improving their standard of living is totally dependent entirely on the income derived from driving three-wheelers for hire.

b) They spend a large portion of their time waiting for a customer on the road.

d) There are many other factors such as many of them are underemployed and also involved in frequent road accidents.

e) Youth who are passing out from secondary education are immediately attracted to work as three-wheeler drivers due to limited employment opportunities, very low entry barriers and the opportunity to be self-employed.

f) The annual average increase of three-wheelers into the market is around 14%. This creates many opportunities annually for young people who cannot find gainful work to join this industry.

To address this issue Sri Lanka needs a strategy to provide a platform for the current three-wheeler drivers to engage in productive work that can deliver better income, in line with their future aspirations. The strategy would be to engage potential new entrants, as well as those who are in their early stage of their career to join new fields which requires training and retraining. The strategy requires the setting up of new programs that can set them up for industry and at hours convenient for them, given their current working patterns.

The objective of this strategy of creating better livelihoods needs to be conveyed to them through mobile, print and electronic media where the target audience will have regular access. This effort would require coordinated action from the vocational training authorities, universities, chambers, schools and the private sector. Further, labour market reforms are required for the creation of an enabling environment, which will cater for new types of job/work opportunities and part time work. Also training of trishaw drivers like what is done by the Tourism Ministry, in several districts, under its tourist-friendly training programs, must be expanded.

Three-wheelers are one of the vital means for low cost transportation in Sri Lanka. It serves as a family vehicle and during heavy traffic, it is usually used as a quick means to get to places. Further, it is also used for transportation in underserved rural areas, it generates substantive income for the leasing and lending institutions, provides livelihoods for people in the repairs and maintenance sectors. Therefore, the efforts should be well thought through, particularly in view of the public transportation gap which is likely to create and the loss of livelihoods.

Practically no vehicle should be rendered redundant due to the exit of a driver into more productive employment. Their places could be taken by new people, ideally retirees like in Singapore, given that Sri Lanka is experiencing an ageing population. There’ll be more people over 50 years of age in the next 10 to 15 years, which means there’ll be more people in that category looking for work. Importantly, over time the growth of three-wheelers in Sri Lanka must be reduced with the entry of smaller four-wheel vehicles to minimise accidents and emissions.