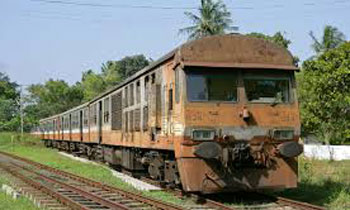 He said that the Department has awarded a tender to a private firm called ‘Tantri Trailers’by ignoring the Ratmalana Railway workshop employees who could have carried out the maintenancework on the compartments.

“If the work was entrusted to the Ratmalana workshop, the workers would have carried out the work at half the cost. A mafia is in control of every inch of Railways. State funds are being misused by the management. Why waste money when we have sufficiently trained human resources,”he asked.

However, when asked, Railway Sub Departmental Chief Engineer, Dilantha Fernando said that the union was misleading the public by manipulating facts.

He said that the maintenance work was handed over to the Tantri Trailers since railways employees had failed to carry them out.

“Many compartments waiting for repairs are abandoned in Dematagoda as the Ratmalana Workshop’s repair outcome is not satisfactory. Our workers are not capable in these kinds of repairs,”he said.

He said the department received hundreds of complaints daily pointing out that the toilets and the interior of the rail carriages were in bad condition. “Especially, the Japan made S8 Power-set trains are in a very dilapidated condition; we could not wait till the workshop completes the repairs,” he said.

Under the tender conditions, firms have to restore the interior, floor and the toilets completely in the train carriage. However, he said that they would not let the firm touch the compartment body or the under frame and those would be undertaken by the Ratmalana Workshop.

Speaking on the matter, Transport and Civil Aviation Ministry Secretary Nihal Somaweera said that the ministry had taken measures to refurbish 200 carriages to provide a better service to the passengers.

“The workshop just has a capacity to refurbish 5 compartments per year. But the private firm has agreed to complete the task within 3 years.” He said.

To purchase a new carriage, the department has to spend around Rs.60mn and under the new refurbish contract it could be done at a cost of Rs.10mn.

The firm has to handover five carriages each month and the payment is to be settled monthly. (Thilanka Kanakarathna)