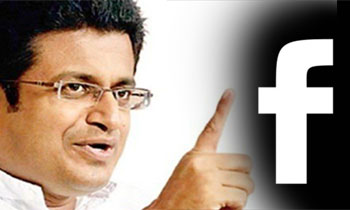 The Pivithuru Hela Urumaya (PHU) today requested all Sri Lankan Facebook users to put a black flag as the profile picture on January 8 as a protest to this government which is completing two years.

Addressing a media briefing, PHU General Secretary MP Udaya Gammanpila said it could be the only way to show the people’s displeasure on this government and added that there were many reasons for people to do so.

“The government has initially appointed Mr. Ranil Wickremesinghe as the Prime Minister in an unlawful manner just after Mr. Maithripala Sirisena was appointed as the President. It was the first step towards despotism which is now prevailing in the country,” he said. (Kalathma Jayawardhane)