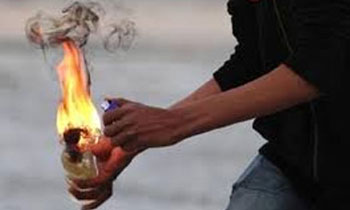 They said the bus was passing the Sudugala bend at the time of incident and the bus was heading to Colombo from Monaragala .

The driver was admitted to the Embilipitiya District General Hospital with burn injuries.

The front face of the bus was damaged after the attack. The bus belonged to the Monaragala depot.

Police said the petrol bomb was thrown by a person who was on the top of a ‘Bo Tree’ near the Sudugala bend.

No suspects had been arrested yet and the Godakawela police are conducting investigations. (Ajithlal Shanthaudaya)