You are here: Home / Breaking News / Over 200 arrested at Trump inauguration protests in Washington – Daily Mirror 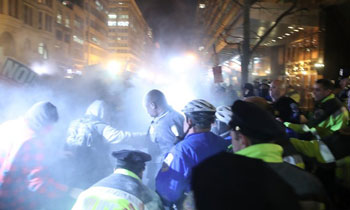 At least two DC police officers and one other person were taken to the hospital after run-ins with protesters, DC Fire Spokesman Vito Maggiolo told CNN.

Bursts of chaos erupted on 12th and K streets as black-clad “antifascist” protesters smashed storefronts and bus stops, hammered out the windows of a limousine and eventually launched rocks at a phalanx of police lined up in an eastbound crosswalk. Officers responded by launching smoke and flash-bang devices, which could be heard from blocks away, into the street to disperse the crowds.

“Pepper spray and other control devices were used to control the criminal actors and protect persons and property,” police said.

Anti-Trump protests also broke out Friday in US cities, including New York, Seattle, Dallas, Chicago and Portland, Oregon. Authorities in Seattle say one person was in critical condition at a hospital with a gunshot wound. Demonstrations also took place overseas in Hong Kong, Berlin and London.

In Washington, Newsham told CNN the several hundred demonstrators who actively confronted police were vastly outnumbered by the thousands of nonviolent protesters who swarmed the nation's capital for Inauguration Day and Saturday's Women's March on Washington.

“We have been pointing out all along that this is a very isolated incident, and by and large, everything is going peacefully and a lot of folks have come to the city to enjoy this historic day, not only the Capitol but walking all around the city,” he said.

But many protesters, including permitted marchers, accused security personnel of denying them access to their planned routes. (CNN)