You are here: Home / Breaking News / Only solution is to abolish SAITM: IUSF – Daily Mirror 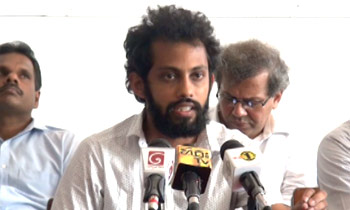 The only solution to resolve the SAITM Malabe Medical Faculty issue was to abolish it and not appointing various Commissions to come up with different solutions, the Inter University Students’ Federation (IUSF) said today.

IUSF Convener Lahiru Weerasekara said it was the responsibility of President Maithripala Sirisena to abolish the private medical university.

“The President’s political alliances and affiliations are not important in this issue. It doesn’t matter whether he holds the power or not. As the first citizen, he should intervene and abolish this university without appointing Commissions,” he told a news briefing.

He further said that implementing the recommendations made to Parliament by the committees appointed by President Sirisena during his tenure as then Health Minister could have solved the matter rather than hand the matter to another Committee.

“The President should inform the public straight away whether he could ban the SAITM medical institute or not. If he is unable, he should say that his executive presidential powers not enough to do so”

He said the entire period the President kept silent leaving the country’s matters aside.

However, he said that the university students’ actions affected on the government, which forced the President to break his long silence and to pay his attention on the matter. He said the IUSF is in a process of discussing the matter with many trade unions, and with the support of them they would knee down the people who are trying to privatize the free education system. (Thilanka Kanakarathna)