Rice has been Sri Lanka’s staple diet for thousands of years and our country was once known as the rice bowl of the region. But the Agriculture Department has warned that due to the lack of rain Sri Lanka may face a rice crisis by June this year and we may have to import our ‘buth patha’. 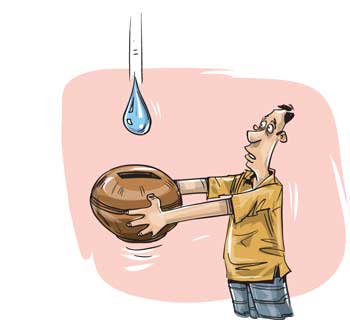 Agriculture Director General Rohan Wijekoon has said the lack of water for paddy cultivation is expected to drastically reduce rice production by June this year. According to him, there has already been a sharp drop in paddy cultivation during the current season. Paddy farmers had hoped to cultivate about 800,000 hectares yet they were able to cultivate only about 300,000 hectares last year. The Agriculture chief says that last year, Sri Lanka had a paddy harvest of 2.7 million metric tons — higher than our requirement of 2.2 million metric tons. As a result the buffer stocks will be sufficient till next month. The lack of rain has also reduced water levels in the tanks or ‘wewas’. The Irrigation Department has told the Agriculture Department that it will stop or cut down the amount of water provided to the paddy fields, because it needs to preserve water for drinking and other essential purposes.

Mr. Wijekoon says that farmers who expect to cultivate paddy during the Yala Season from April to September this year may not get enough water from the Irrigation Department as the tank levels are low.

According to the Irrigation Director General S.S.L. Weerasinghe, the water levels of the tanks had gone down to about one-third of the capacity. He says some tanks are filled with mud and silt. Therefore retaining water even during heavy rain is difficult.

Whoever or whatever is responsible for this crisis, whatever the mess up or mismanagement, we need to look at the possible solutions where not only the government but also eco-friendly and responsible citizens could get proactively involved.

For instance the people need to voluntarily and willingly save fresh water. This is not just to reduce our water bills but more so to participate actively in an eco-friendly move to save fresh water at a time when the supplies are running low and we do not have sufficient water for paddy cultivation.
During the past two decades the United States and other big powers have gone to war in Afghanistan and Iraq not just to curb terrorism but more so to gain control of oil and natural gas supplies. World political analysts have warned that in the coming decades worldwide fresh water supplies will be so low that big powers may even go to war to gain control of fresh water resources. Sri Lanka with so many big rivers and may be one of the targets.

While taking measures to prevent any such move to grab our fresh water resources, we also need to take steps to conserve water. If every responsible citizen could consciously save about 10 litres of water a day the overall saving will be millions of litres daily.

Going beyond that, more people need to go for the eco-friendly practice of rainwater harvesting. The internet has details of organisations where rain water experts rainwater could help families to install the equipment at a low cost.

Ages ago our great king Parakramabahu told us that not a single drop of rainwater should be allowed to go waste without using it for cultivation, drinking and other essential purposes. But today millions of litres of rainwater go waste while in times of drought the lives of farmers and others are severely affected. While responsible families need to act on the rainwater harvesting process the government also needs to revive an earlier plan to restore about 10,000 ‘wewas’ which have been acclaimed as marvels of ancient engineering.

This year being the year of poverty alleviation and the launching of the sustainable development strategy, the provision of water for drinking or other household purposes and for agriculture is vital. We urge the national government to provide incentives including tax concessions for household rainwater harvesting and also to give priority to the restoration of the ‘wewas’.