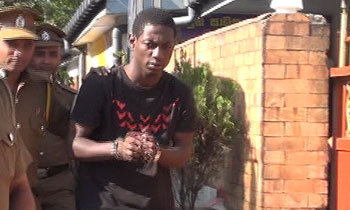 A Nigerian National, who had befriended a married woman in Sri Lanka over facebook and later lured her into giving him Rs 4.3 million, was apprehended in Malabe.

Sources revealed that the woman, who was from Badulla, had been seduced by the suspect over facebook. He had allegedly promised to give her valuable presents after showing her photos of gold jewellery and other valuables and had won her heart.

The suspect had then informed the gullible woman that in order to release the parcels containing these valuables, a customs duty amounting to Rs4,360, 000 needed to be deposited to three accounts. The woman had readily agreed and deposited the money. The suspect identified as Benson David (22) is a student at a reputed private institute of higher studies. The complainant woman (38) is the mother of one and her husband is employed abroad. Her husband had been remitting about Rs 100,000 every month to her while he was abroad.

At the time of the arrest the suspect had a total of Rs1.8 million in his bank account. He was produced before the Passara Magistrate yesterday and was remanded until the 22 on the orders of Magistrate Rasanjana Jayasekera.(Palitha Ariyawansa)