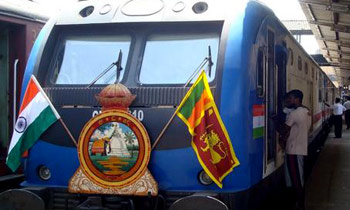 Attending a function to commission a semi-luxury train service between Colombo Fort and Matale on Friday, January 20, he said the Railways Department was considering purchase of special and efficient engines manufactured in the Europe for servicing hill country lines.

The purchase would be made using funds granted by India.

“It will take one-and-half years to receive the locomotive engines after placing an order. Then only can we create a quality railway service. The Government has decided to keep the transport services even it created a loss for the benefit of the people,” the Minister said.

He also said that the railway tracks would also be upgraded to give a quality and speedy, safe and comfortable service.

He also said that the railway tracks would be maintained accordingly.

The SLGR, as a passenger and freight oriented transport sector, had contributed a good service to the public and private sector, he said.

“And also has served well as a working class passenger transport, coal transport, oil transport in the country,” the Minister said.

Therefore, he said the government would not let the service to collapse and that all measures would be taken to develop and maintain the locomotives engines, compartments and railway stations. (Thilanka Kanakarathna)