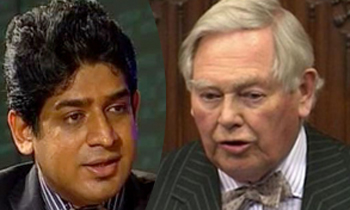 The statement made by Lord Naseby during the sessions of Britain’s House of Lords will help Sri Lanka to safeguard the dignity of its security forces to some extent, State Minister of Foreign Affairs Wasantha Senanayake told Parliament yesterday.

The State Minister made this remark in response to an allegation made by Joint Opposition Parliamentary Group Leader Dinesh Gunawardene that the government is ignoring this statement and is not making any effort to make use of this statement to create a favourable situation for the Sri Lankan security forces.

“Sri Lanka has got an opportunity which it should not miss. We all should write a letter thanking Lord Naseby for taking an initiative to Help Sri Lankan security forces clear their names of the crimes they never committed,” he added

Mr Gunawardene who moved an adjournment motion on the issue said the following:

“Since Lord Naseby, addressing Britain’s House of Lords, drew attention to the fact that the casualty figures for the last period of the civil conflict in Sri Lanka, which ended in May 2009, cited in the United Nations’ Darusman Report, were brought into question by the figures quoted by former UN spokesman Gordon Weiss, by former US Ambassador Blake, in the report by the UK’s Major General Holmes, and finally, by the heavily-redacted communications from the UK’s Lieutenant Colonel Anton Gash released to him by the British Government; and since he further stated that “UK must recognize that this was a war against terrorism, so the rules of engagement are based on international humanitarian law, not the European Convention on Human Rights” and that “the West, and in particular the US and UK, must remove the threat of war crimes and foreign judges that overhangs and overshadows all Sri Lankans, especially their leaders,” the Government should take action to pursue this matter with Britain’s Foreign and Commonwealth Office and with the UN Human Rights Commission to change their unjust positions in regard to Sri Lanka”. (Yohan Perera and Ajith Siriwardene)