The less beaten track from Panama to Okanda, one of my favourite places in the wilds and heritage sites of Sri Lanka, is an adventure in itself. It is an amazing place; it has not changed in many years. My first encounter with the region goes back to the 2000s, just after the Peace Accord was signed between the Government and the LTTE.

Those days there were no roads, no phones and it is still in the same elemental state as it was centuries ago. But the people are so generous and are blossoming in their new life in a peaceful environment. History chronicles that they are descendants of the rebels in the Uva-Wellassa Rebellion of 1818 who took refuge in this forested land. Some of these people just return to their ancestral lands to start their usual profession of farming.

This is just one of the exotic locations for me as a history buff and photographer. My relationship with Panama and Okanda is what influences and inspires me – the local life, people and places. While journeying to Okanda during the past years, I had the opportunity to click stunning images I wanted in my mindâ€™s eye.

The wild, the free, the beautiful, a fascinating pictorial book by legendary photographer, the late Nihal Fernando, published more than five decades ago has impressive images of Sri Lankaâ€™s nature, history and wildlife. He has shot a number of frames of village life to wildlife from Pottuvil to Okanda and Kumana in this book. I am greatly influenced and inspired by photographer Nihal Fernando, who I met in his studio in Colombo in 1989.

Growing up, his books were my all-time bed-time favourites, with each perfect picture telling a story of its own. I would look at his pictures every day, sometimes for hours at a time. They never got boring, they never got old. A photograph which impressed me most and remains firm in my memory was a black and white depiction of a Hindu hermit meditating near a waterhole by a massive rock at the Okanda shrine.

Being enamoured with the image, I long cherished the idea of visiting the same location from which Fernando clicked the evocating picture decades ago. And not so long ago, I got the opportunity to visit the Okanda jungle shrine in the deep corner of Kumana, the edge of the Yala East National Park, and I traced the spot where Nihal Fernando had photographed the hermit.

Modified and turned into a commonplace cement structure, sadly there is nothing here to remind one of the evocative photograph in black and white.

Thus, today, Nihal Fernandoâ€™s photograph is, perhaps, a priceless image and a repository of our rich heritage and history.

Okanda is not more than 15 km from Panama, the last coastal village with basic facilities, before you reach the Okanda shrine. The narrow sandy road from Panama to Okanda extends southwards parallel to the coast, dotted with several large and small salt water lagoons, villus and dense forest patches, which are all parts of the Kudumbigala Sanctuary.

Beside the road from Panama to Okanda, I discovered village life and witnessed farmers working in the vast green paddy fields with herds of cattle and spotted elephants roaming around in muddy, emerald villus, as man and elephant co-exist here peacefully. I had an opportunity to see more bird-life in the surrounding lagoons.

Historically, Panama and the surrounding areas had belonged to the Magama-Ruhuna kingdom and has traces of historical importance. The Magul Maha Vihara and Muhudu Maha Vihara are linked to the narrative of Queen Viharamahadevi and King Kavantissa.

Of spiritual importance are the Kudumbigala forest hermitage and the Okanda jungle shrine. This Hindu shrine dedicated to Lord Murugan (Kataragama Deviyo) is an important place of worship on the annual Pada Yatra from Jaffna to Kataragama via the Kumana National Park.

Renowned as one of the worldâ€™s best surfing spots, nearby Arugambay welcomes surfers from around the world. But it is not merely about great waves, the bayâ€™s surrounding areas present a vibrant culture, lifestyle, history and wildlife. 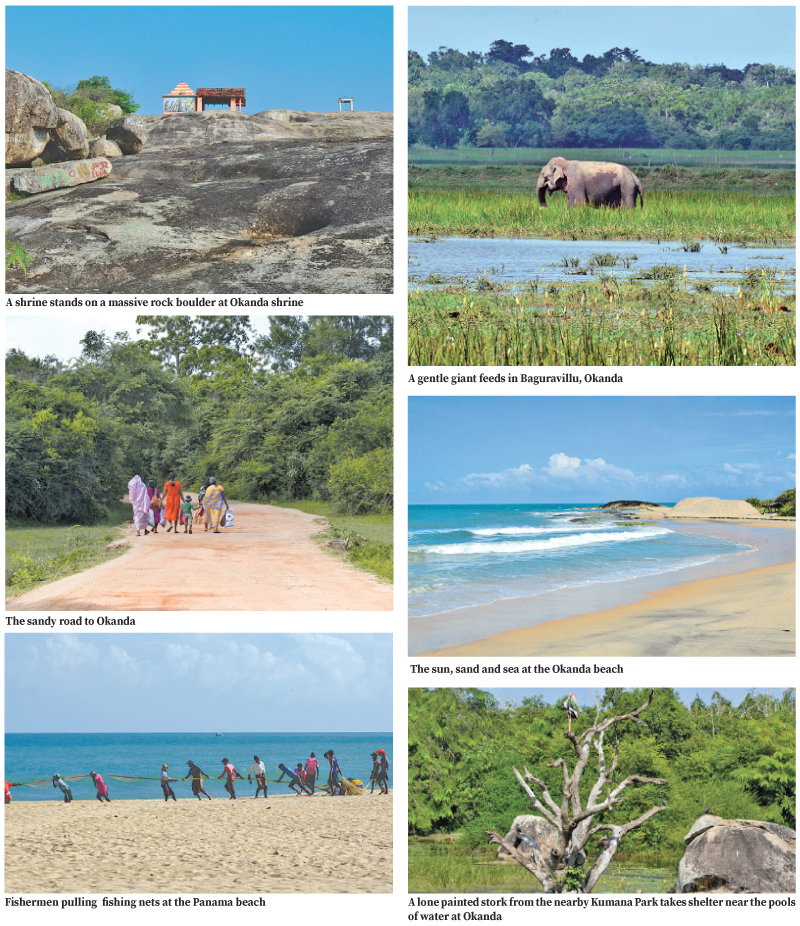