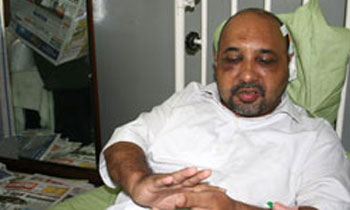 Three Army personnel including a Major attached to the Military Intelligence Unit will be presented before an identification parade in the Mount Lavinia Magistrate's Court in connection with the assault on senior Journalist Keith Noyahr.

The CID today told Courts that they had sent emails to Keith Noyahr and was trying to contact him through the Foreign Affairs Ministry seeking the possibility for Keith Noyahr to attend the identification parade.

Mount Lavinia Additional Magistrate Lochana Abeywickrema Weerasinghe ordered that the suspects be further remanded till March 3. The military personnel were suspected in the abduction, causing serious and minor injuries with the use of a weapon , unlawful detention and inflicting cruel punishments on Keith Noyahr.

Earlier, the CID arrested five army personnel including an Army Major, over the incident and on February 20 they were suspended from service by the Sri Lanka Army till the CID investigation was completed.

Senior Journalist Keith Noyahr attached to the Nation newspaper was abducted by an armed group on May 22, 2008 and was later released after being assaulted. The CID had informed court that it had investigated a number of telephone conversations in relation to the incident and it was found the presence of suspected Army Intelligent personnel in the vicinity of the Maradana area during that time. The police also had filed more than 20 statements from witnesses. (Nirangi Abeywickrama)