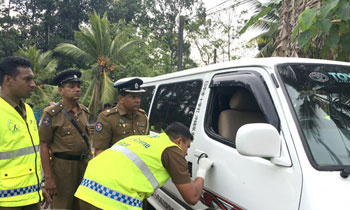 The vehicle used in the recent shooting where at the Black Mariah vehicle in Kalutara killing two prison officers and five suspects, had been identified as a one that was robbed from a cab service some time back, the police said today.

The gang, had hired the vehicle to travel to the Bandaranaike International Airport (BIA), and later hijacked it after sedating the driver in Maradana.

Police, who ran a forensic check on the vehicle, later discovered a glove hidden inside the vehicle.The glove that was found was given to police sniffer dog Grero, who led police to an abandoned factory which was identified as the place where the vehicle in the shooting was found abandoned.

Police Special Task Force (STF) has been deployed to conduct a search operation in the area. (Thilanka Kanakarathna)