You are here: Home / Breaking News / How Rajapaksaism destroyed the SLFP – Daily Mirror 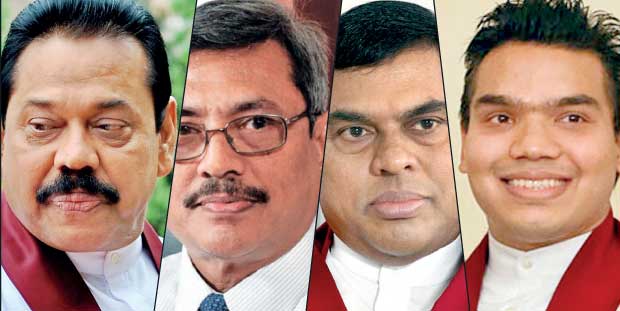 “The first method for estimating the intelligence of a ruler is to look at the men he has around him.”
~Nicco Machiavelli

There was no Machiavellian nuanced statecraft. There was no Dudley Senanayakian transparency and honesty. There was no Jayewardenesque stoicism. There was not even lofty but empty rhetoric of the likes of SWRD Bandaranaike. There was no veiled brilliance of a shrewd leader; only undisguised greed for power and unremarkable exercise of it was visible and this unkind spectacle was being witnessed by a wretched citizenry of a nation tired of waiting for the manifestation of a messiah.

The withering values of a community loosely bonded by the harsh and hostile powers of the British Raj and controlled by the alien Administrative and Financial Regulations (AR and FR) of Westminster rules guarded by the ‘Establishment Code’ of the same civil service, could not withstand the onslaught of an expanding culture that descended upon the unsophisticated majority. It is intellectually dishonest to classify this culture as novel or fresh; it has been there encompassing the collective body of Sri Lankans ever since Independence, yet its development as a dynamic social force was not all that visible and noticeable. Its accelerated alacrity, its concealed state of decay, its eager sense of being identified and categorized as the norm and not an exception and its eventual capture of the collective psyche of the general masses were all conducive to a society that is maddeningly oblivious of and insistent on self-mortification.

With each passing year since the dawn of the 21st Century, Rajapaksaism that was the culture and ideology of the day kept brainwashing the trusting masses on their ideology, strangely estranged from the broadcast Bandaranaike policies of serving the interests of the ‘common man’. Bandaranaike’s SLFP was a unique political concoction, drawing its strength as well as weakness from the five pillars (Pancha Maha Balavégaya) upon which it was founded.

Its core-best was essentially made up of the Sinhalese-Buddhist elite in the backward areas of the country and the enormous appeal it had was translated by this Sinhalese elite as a political party determined to right the wrongs done by the successive colonial rulers, Portuguese, Dutch and the British, unto the majority Sinhalese-Buddhists in the country. This approach adopted by the rank and file of the SLFP paved the way for a new positive awakening amongst the majority on the one hand and an irreversible radicalization of the response by the Sinhalese-Buddhists in the rural regions to the English-speaking Sinhalese in Colombo and other big cities such as Jaffna, Kandy, Galle and Kurunegala.

Consequently, ugly and unquestionable signs of polarization of a nation were showing their obnoxious countenances everywhere. An immeasurable dynamic of national divisions along ethnic streaks began taking over the average mindset of man who, a century ago knew no such visible partisanships whatsoever. The division between the Northern Tamils and Southern Sinhalese remained a subject of discussion, especially among the foreign-educated; various solutions and resolutions proposed and rejected among which were federalism, Tamil homeland, district councils, 50-50 demands and devolution of political and administrative powers were discussed and intense debates performed in English language by these very same Pukka Sahibs whose knowledge and empathetic feel were next to nothing.

Into such a vacuum of political thought and action entered a Sinhalese-Buddhist nationalistic streak that was more based on ethnic hatred and social envy. Introduction of Sinhala-stream education is indeed a highly commendable feat. Yet the negligence and oversight of its long-term ill-effects, its drastic measures of disregard of English as a tool of the upper-class of the land coupled with the haste with which the whole policy was put into action deprived the ‘children of the ’56 revolution’ of opportunities that were available to their preceding generations. Unavailability of facilities in the distant schools in Ceylon for English education contributed heavily towards the gulf between the city and rural students in the country to be further widened.

The Sri Lanka Freedom Party which began this revolution was not ready to handle this worsening situation and the eventual demise of its founding leader at the hands of a Buddhist monk personified the cruel irony of his ‘Swabhasha’ policy. Yet, SWRD could never be blamed for financial corruption or nepotism. In the three short years when he ruled the country, there was no identifiable relative of his occupying the seats of power; neither his wife, children, though they were relatively young, or any blood relative of Bandaranaike was dictating to government officials what or what not to do. But his departure spelled another kind of departure from the party, SLFP. When Sirimavo Bandaranaike became the leader of the party, the political dynamic changed, never to go back to a non-nepotism political entity.

Various cliques were found to be forming among the relatives of Sirimavo Bandaranaike. There was the Anura-clique, Sunethra-clique, Chandrika-clique, Felix-clique, Mackie Ratwatte-clique etc. Each of these cliques had its loyalties to its specific leader, yet when taken as a whole the collective loyalty was to the Party. Formation and development of a modern political party into one that is essentially and fundamentally a ‘family-oriented’ political body began in earnest. What MR inherited was this political party.

The rank and file of the SLFP was so fed and nourished ever since the departure of its founder SWRD Bandaranaike in 1959 right up to 2005, on a regular dose of family-bandyism, they never saw a world without family rule. Its party hierarchy may have been reflecting a structure that was manned and womanned by non-family members, yet when in power, that power always revolved around the family and as a result the leadership was never ever available to the so-called ‘common man’ under whose name it came to power. The cliques were different but their collective subservience was to the family-collective. MR fitted into this convoluted mindset of the party and its rigid physical structure like a well-greased palm into a surgeon’s glove.

The same parade of family members of the ruling leader continued in a more blatant and brazen fashion. Cliques began their gradual formation: Basil-clique, Shiranthi-clique, Gotabhaya-clique, Namal-clique, Chamal-clique, Yoshitha-clique and Rohitha-clique ruled the day. And the rank and file unashamedly accepted this tragi-comic spectacle. The same principle applied and the same principle was enthusiastically propagated. One after another, the loyal clique members paid their puja to their respective masters. But there was a marked difference between this exhibition of loyalty and one displayed before the Rajapaksas stumbled upon the treasures of the SLFP leadership. The Bandaranaikes played the same game with some finesse. The Rajapaksas, in the slang of the common man, were ‘yakkos’.

Maithripala Sirisena is an anomaly. The political party that seemed to have lost its way among the members of this family or that family all of a sudden had to be loyal to its new leader who could boast of no family hegemony. But the Rajapaksas who were expelled from power at the elections could not come to terms with this non-family-dominance of their party. A significant part of the rank and file too seems to have found the new leader ‘unworthy’ of their veneration. The current conflict in the SLFP is essentially that, the absence of room for cliques to be formed and developed so that several, instead of one, route to the leader are available.

The UNP on the other hand, with all its other weaknesses, could stand aloof of this self-destructive mechanism called nepotism. The one and only instance was when DS Senanayake, the founder of the UNP, had the intention of handing the party leadership to his son Dudley. But to the credit of Dudley Senanayake, he in turn did not seek any indulgences in nepotism and nor could any fair-mended person question his qualifications or credentials for the job. Corruption and nepotism were far from Dudley’s mind.

The expulsion of the Rajapaksas at the elections in 2015 did not seem enough for the Rajapaksas. A misplaced and strong sense of ownership, not of the party, but of the country, seems to be their overpowering sentiment; an uncommon sense of avariciousness, accumulation of wealth and other comforts at the expense of the common good of the common man totally consumed them and the unjust and utterly ruthless manner in which they treated the then Commander of the Army and Chief Justice stand out as mindless exercise of power when they held that power.

But the tragedy lies elsewhere. It resides in the fact that there are a sizeable number of gullible morons who still hang on to these brokers of greed and power hunger. Their support for these politicos who are a vile example of power-seekers has buttressed them to form a new party. The challenge before the SLFP leader whom also happens to be the President of the country, the man who had the daring to oust MR from power is to cleanse the party he seems to love so much. Or perhaps, it might be too late now.

The writer can be contacted at vishwamithra1984@gmail.com