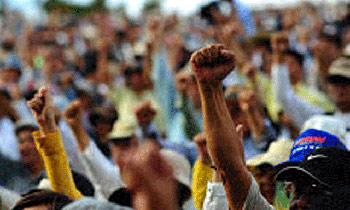 The government is considering the possibility of specifying locations in Colombo City where people could stage protests or demonstrations, instead of staging them on the streets or elsewhere, it is learnt. This is would be in line with practices in various cities of the world, where people may assemble only at specified locations to stage their protests.

This was mentioned by Prime Minister Ranil Wickremesinghe when he met senior police officers at Temple Trees last Friday. Sources from the Ministry of Law and Order said this came up for discussion when the police officers informed the prime minister that protests held across Colombo and in locations such as Parliament Road had become a problem for them.

The prime minister had also informed the police that they would be provided with new equipment such as helicopters in the future. “Helipads will be set up all over the country soon, and police will also get an opportunity to carry out operations using helicopters,” he had said.

He had also stressed the need for for policemen to develop bilingual skills as this would help Sinhalese policemen to work in Tamil and thereby serve the people better.

Law and Order Minister Sagala Ratnayake, who also participated in the discussions, had promised that the salary increment proposed in the budget would be given soon. He had said police personnel would be given a course on dealing with cybercrimes.