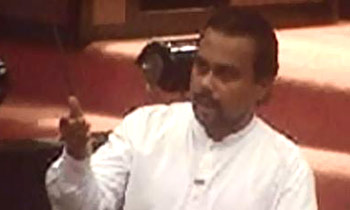 Leader of National Freedom Front Wimal Weerawansa today said that five members belonging to his party will function independently in opposition and that they should be recognized as a separate party in Parliament.

Mr. Weerawansa said he has informed the Speaker about this decision in writing earlier and the latter had failed to heed the request.

Minister Rauff Hakeem said there is precedent that an MP or MPs who contest from one party is not recognized as a separate group. Accordingly, he said his request to recognize SLMC as a separate group in the House was not accepted as his party had contested the re-election under the elephant symbol.

MP Dinesh Gunawardene said former Speaker Chamal Rajapaksa has given a ruling that parties in the House are recognized as separate groups if their leaders are elected as MPs. (Yohan Perera)