This is a clear indication that how simply, openly and arrogantly politicians tend to deceive people who had voted them to office.

The President’s promise to scrap the system was not a secret. It was such an important pledge he had given to the country and so widely discussed during the 2015 January Presidential Election that one could describe that election as a referendum on the system. 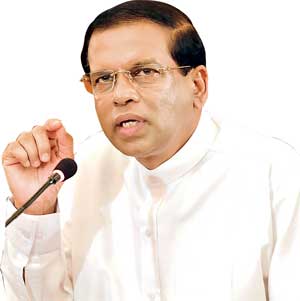 The Government formed by President Sirisena from the inception was called “Yahapalanaya” (Good Governance) Government as he had given a series of promises towards democracy including the abolition of executive Presidency. The coalition of political parties that was formed on the eve of the 2015 August Parliamentary elections were also called the United National Front for Good Governance (UNFGG). The first Constitutional Amendment that was to be introduced by the Yahapalanaya Government in April 2015 was meant for the doing away with the Executive Presidency, but later the decision was changed just to trim some of the powers vested in the President, as the legal experts had advised to hold a referendum if the government wanted to totally scrap the system
One can even argue that Maithripala Sirisena was able to win the Presidential Election mainly due to his promise to abolish the Presidential rule as the highhanded administration by former President Mahinda Rajapaksa had been hated by many in the country then. However, after all these the party led by Maithripala Sirisena had now the audacity to tell the people that not only was he ready to breach his promise but also was going to contest the next Presidential Election.

In a way, if one takes into account only the last Presidential election ignoring the situations prior to that, he would not blame the SLFP for taking this decision to continue with the Executive Presidency, as the party was fighting not only for the original Executive Presidency at the last Presidential Election, but also striving to maintain that system strengthened further with the 18th Amendment to the Constitution.

However, the case with President Sirisena is different. Despite being the SLFP leader now, how can he agree to the party’s decision to further maintain the system, after pledging the country otherwise?
SLFP Ministers in the UNP led Government such as Dayasiri Jayasekara Wijith Wijayamuni Zoysa, Dilan Perera and S.B. Dissanayake argue that the President, though elected to the office as a candidate of another party, had to abide now by the party decision.

It seems to be a tricky situation for the President, if he in fact had not had prior knowledge about the decision. He has to abide by the party discipline on the one hand and by the mandate he had been given at the election on the other. However, he is maintaining a deafening silence on the matter.
Can the President go back on his words just because his party requests him to do so? Interestingly, at one point the party itself attempted to prevent him from coming to office. It is no secret that the President had gone into hiding on the Election Day, until the results were announced.

He had told many a times after the election that had he been defeated by the UPFA, the coalition led by the SLFP, he would have been six feet under the ground. On the other hand, having well known that the party leader had pledged the country to abolish the current system of governance, how could the SLFP decide to field him as its candidate at the next Presidential election, if it respected the people’s mandate?

If the President was not a party to this decision, one can even infer that there was a conspiracy to defeat him at the next election by making him tarnish his own image through this decision.
Almost all the SLFP members of Parliament were behind former President Mahinda Rajapaksa even during the Parliamentary Elections that were held seven months after the President Sirisena’s election. President had to remove the two General Secretaries of the SLFP and the UPFA, Anura Priyadharshana Yapa and Susil Premajayantha who were currently holding Ministerial portfolios, on the eve of that election, as they were working against him.

The SLFP rank and file except for a small group that supported the President at the Presidential Election did not have any reason to shift allegiance from Mahinda to Maithri.

Besides, what is puzzling is the President’s silence on the matter.

He is not a child to be hoodwinked. He showed his political acumen during the last general election, in spite of some of his speeches being censored by the Chairman of the Election Commission. Political parties in Sri Lanka usually do not take decisions against the wishes of their respective leaders.

Therefore another inference that can be made is that the President, after changing his stance on the executive Presidency is attempting to portray it as a decision by the party, and not initiated by him. As the Rajapaksas are attempting to recapture power mainly to defend themselves from the allegations of corruption and crimes, the President also might be planning to shield himself in the future as well with the executive powers he is currently wielding.

The two main political parties in the country cannot justify their change of mind in respect of the Executive Presidential system of governance as they have done so either way
several times.

The UNP which introduced the system to the country through the Second Republican Constitution in 1978, came forward to scrap it in 1994, when the then party leader Gamini Dissanayake pledged support to Prime Minister Chandrika Kumaratunga to do so. Then the party ridiculously staged a huge demonstration in 1997 demanding President Kumaratunga to keep her promise to rid the system while maintaining that it would not do so when it comes to power in future.

The UNP had changed their stance again in 2014 when they wanted a strong slogan to defeat President Rajapaksa.

The SLFP which opposed the current system of governance till 2010 shifted its stand when President Rajapaksa further strengthened it with the 18th Amendment to the Constitution in that year. Then the party went back to its original position under President Sirisena before it decided otherwise last week for the second time.

All in all, both main parties have hoodwinked the masses in this matter for nearly forty years.