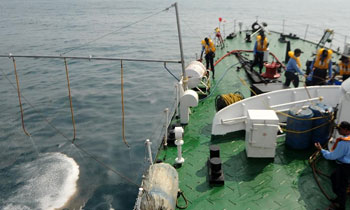 That’s something investors in Southeast Asian markets should keep a wary eye on, as it opens yet another front between the two Asian giants, raising the geopolitical risk of investing in the region.

Sri Lanka’s colonization began back in 2007, when China supplied President Rajapaksaboth military and diplomatic support to crush the Tamil Tigers. Then came high profile construction projects and high interest loans that eventually were swapped for equity, transforming China into an owner of Sri Lanka’s major port— and a key outpost in the Indian Ocean for Beijing.

That’s bad news for India, which is becoming encircled by China.

For its part, China has repeatedly asserted that it doesn’t plan to use the port for military purposes, this assertion coming as recently as last week.

But history proves otherwise. In the past three years, Chinese submarines  have begun suddenly and repeatedly showing up in the Chinese-operated South Container Terminal in the port of Colombo.

“For India, the sudden appearance of a Chinese submarine in Sri Lanka was too much to bear,” continues Smith.“Seventy percent of Colombo’s transshipment traffic comes from India, and New Delhi has long been concerned over China’s efforts to expand its presence in the island nation.”
When Indian Prime Minister Narendra Modi met Rajapaksa a few weeks later, he reminded him that Colombo ‘was obliged to inform its neighbors about such port calls under a maritime pact.’ But the same submarine surfaced again in November 2014, catching New Delhi by surprise once more.

Apparently, what China says it plans to do with its colony and what it actually intends to do are two different things. And India must either devise a plan to contain China or be prepared to put up with it.(AFP)