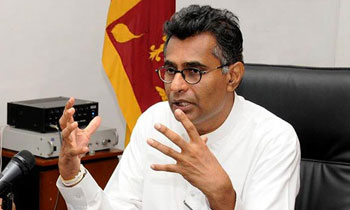 The SAITM (South Asia Institute of Technology and Medicine) controversy was fast heading towards a violent situation that might claim lives of the youth in the country, Megapolis and Western Development Minister Patali Champika Ranawaka has warned.

Reminding the loss of lives during the efforts by the then Government to introduce private Universities in 1980s, the Minister in a Cabinet Paper had warned the Government not to aggravate the situation.

He said in the Cabinet Paper that universities in the US, UK, Canada, Australia, New Zealand, France and Germany were run as none-profit institutions and university education in those countries except for the US was purely under the Government's purview.

He also observed that the quality of the higher education in India has declined due the privatisation of University education and the prestige that had been gained internationally by the Indian doctors was also fast eroding as a result.

Hailing the standard of the State Universities in Sri Lanka Mr. Ranawaka observed that Colombo University had ranked 2,092nd under the Webometrics Ranking of World Universities, while the SAITM ranking 16, 964th place.(Dayaseeli Liyanage)