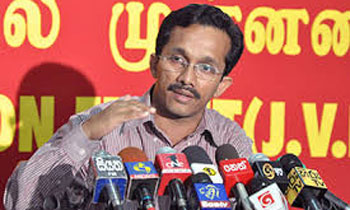 JVP MP Sunil Hadunnetti said yesterday that beer consumption had been promoted with the Budget reducing taxes on beer and by removing the production tax on a can of beer.

“A beer factory uses about 300 bags of sugar daily for the production of beer,” the MP said.

Finance Minister Mangala Samaraweera said more than 100 gm of sugar is contained in a 400 ml bottle of soft drinks and pointed out that there was no issue in consuming a can of beer.

“We imposed tax according to the volume of alcohol consumed to discourage the consumption of strong drinks containing high volumes of alcohol,” he said.

Minister Sarath Amunugama further explaining the matter said, tax would not affect the consumption of sugar in general and added that it would only apply to the sugar content in soft drinks. (Ajith Siriwardana and Yohan Perera)