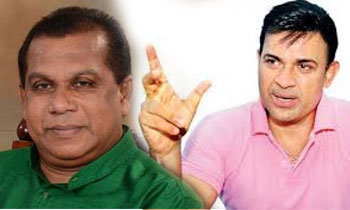 Public Administration and Management Minister Ranjith Maddumabandara today said he regretted if Divulapitiya Divisional Secretary had to face any inconvenience because of the phone conversation with Deputy Minister Ranjan Ramanayake.

Issuing a statement after meeting between Sri Lanka Administrative Services Association (SLASA) officers, the Minister said it was the responsibility of both the Government and the State employees to look at the situation in an impartial manner without being aggressive.

He said a discussion was held with the SLASA representatives recently over the issue. The dignity of their services and security had also been discussed.

“As a responsible member of the Government and a Minister, we are dedicated to the protection of State employees and their reputation,” the Minister said.

Commenting on the controversial incident, he said it appeared that the Deputy Minister was inquiring into an environmental issue, which affected the people.

Minister Maddumabandara said it was only natural for a people’s representative to act emotionally when it came to an issue like this.

“However, it doesn’t mean I approved what had happened. Yet, again, the Deputy Minister had appeared on behalf of the people, not to raise a personal matter,” he said. (Lahiru Pothmulla)