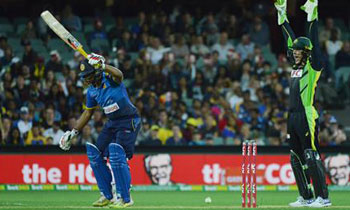 Australia beat Sri Lanka by 41 runs in their final Twenty20 game today, avoiding a whitewash in the three-match series and salvaging some pride.

Australia got off to a flier courtesy of captain and opening batsman Aaron Finch's 53 runs off 32 balls. His partner Michael Klinger scored a controlled 62 runs off 43 balls to help take the hosts to a total of 187.

Sri Lanka began impressively but wickets tumbled as they struggled to cope with leg-spinner Adam Zampa, losing five wickets, including that of in-form all-rounder Asela Gunaratne, between the eighth and 12th over.

Zampa and medium pacer James Faulkner picked up three wickets each. Australia were fielding a below-full-strength side with their test squad currently in India.

Gunaratne was named man-of-the-series after scoring half centuries in the first two matches.(Reuters)