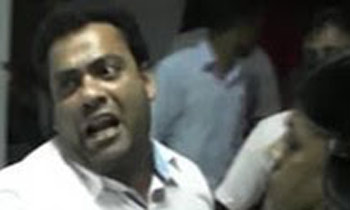 Joint opposition MP Indika Anuruddha today claimed that while pointing fingers at him about illegal sand mining, Deputy Minister Ranjan Ramanayake had issued a letter to the Gampaha District Secretary asking that the sand mining permit of one of his supporters be extended.

The MP said the deputy minister was attempting to cancel soil and sand mining permits of SLFP supporters in Divulapitiya and to give them to UNP supporters.

“More than 200 people are engaged in sand mining and operating stone quarries in Divulapitiya legally. But the deputy minister is accusing me of illegal sand mining to take political revenge. It is up to the Geological and Mines Bureau and the district secretary and not the politicians to look into the malpractices regarding sand mining. The deputy minister is trying to give permits to UNP supporters and his relatives while pretending to protect the environment. I have written evidence and photographs to prove his interference in these matters,” he said.

The MP said the deputy minister was making false allegations against him and his family members and added that they were engaged in the business with permission obtained legally.

He said he expected the President would not allow the deputy minister to cancel the permits issued to SLFP supporters and give them to UNP supporters because they were carrying out a legal business with payments made to the government. (Ajith Siriwardana)